Deah Chapin thought raising a guide dog would be a one-time endeavor when her older daughter, Megan, completed her Girl Scout Gold Award project in 2015. But after Megan finished the project, Chapin and her family felt inspired to continue raising guide dogs for years to come.

“The whole family really enjoyed the project,” Chapin said. “Megan finished her Gold Award at the end of her sophomore year, so she had a couple years of high school left and she wanted to raise a second dog.”

Megan went on to raise multiple guide dogs for Guiding Eyes for the Blind along with Chapin’s younger daughter, Dana.

“They both continued to raise dogs over the years and now Megan, who is going to be a senior in college, has raised dogs all the way through college,” Chapin said.

“Tempest is an easy-going puppy who loves to snuggle,” Chapin said.

Chapin’s history with Girl Scouts began when she participated in Girl Scouts throughout her childhood and teenage years. When her children joined Girl Scouts, she served as a troop helper before eventually becoming a troop leader.

Since 2019 marks Chapin’s final year in her 13-year run as a troop leader, she decided to offer a service project to the troops within her service unit. The project involves visiting the troops with Tempest and teaching the girls about service animals.

“They have learned about the journey that the dog takes to be a guide dog and how to act in public around service animals,” Chapin said.

The girls also learned how service animals change the lives of individuals such as Terry McCann, a recipient of a guide dog from Guiding Eyes for the Blind.

“I think it’s impacted the girls because they have learned about people with disabilities and it’s made them aware of how guide dogs can actually impact a person,” Chapin said. “And they usually share that information with their parents and other people, which helps spread the message about service animals.”

In addition to learning about guide dogs, the troops also based their Girl Scout Bronze and Silver Award projects around Tempest such as making dog treats, toys, and beds, as well as raising money for Tempest’s dog food and toys.

“Before I knew it, Tempest and I were attending eight Girl Scout meetings a month ranging from Daisy to Cadette,” Chapin said.

Although this service project keeps Chapin busy, she enjoys visiting and interacting with every troop.

“It brings me back and reminds me about all the different troops,” Chapin said. “Reconnecting with all the leaders and everyone has been nice.” 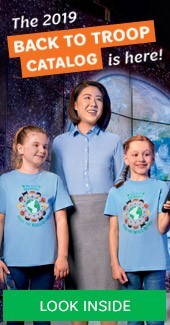