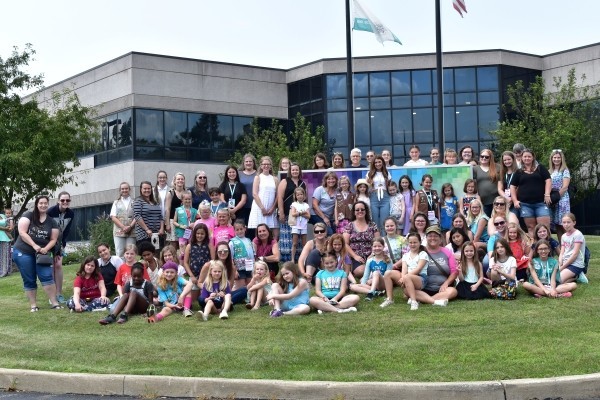 With a smile on her face and a warm spirit, Tenille Townes delivered a passionate four-song set on Thursday, July 25 for 150 Girl Scouts and their families at Girl Scouts of North East Ohio (GSNEO) in Macedonia. Townes also participated in a Q&A session and meet and greet after the performance.

“She’s pretty cool, very inspiring and very down to earth,” said McKenna Grimes, a first-year senior of Troop 50034. Grimes attended the event with her sister, who introduced her to Townes’ music.

Townes kicked off the acoustic set with some original songs including “White Horse” and “Somebody’s Daughter,” which describes Townes’ thoughts after seeing a homeless girl near her home in Nashville. She also encouraged attendees to sing along during a cover of Bill Withers’ “Lean On Me,” changing the words of the bridge to “So just call on me sister, when you need a hand.”

In between songs, Townes urged the girls to follow their dreams and explained the meanings behind some of her lyrics.

She kept the environment light and fun by opening up the conversation for questions after the performance. “I feel inspired by people that I meet,” said Townes in response to a question about her inspiration. “I’m inspired by my family, my grandparents, and by you guys.”

Townes’ empathetic appeal and generous spirit drive her success forward in creating music that relates and inspires. Girl Scouts discovered the G.I.R.L. (Go-getter, Innovator, Risk-taker, Leader)TM in her. She believes in the power of music to affect change. She started her own Non-Profit, Big Hearts for Big Kids, at 15 years old to re-open a youth shelter in her hometown that was shutting down due to lack of funding and raised over $30k in a creative, communal way!

Musically, Townes said Shaina Twain serves as her biggest inspiration. She also enjoys listening to songs that tell a story. “Any song that pulls at your heart and makes you think about something, that’s my favorite,” Townes said.

“The event was fun; it was something different and new and the girls had a good time,” said Debra Covington, troop leader of Troop 50347. “I like how she talked about her guitar and explained all the drawings on her guitar,” Covington said.

For Grimes, the meet and greet with Townes at the end of the event marked the best part of the day. “She was very sweet and willing to talk to everyone and get to know everyone,” Grimes said.

Townes posed for individual photos with every girl at the event before heading outside for a group photo.

The 25-year-old singer-songwriter who is originally from Alberta, Canada currently serves as the opening act for Dierks Bentley’s “2019 Burning Man Tour” and performed at Blossom Music Center on Thursday after her meet and greet. In between tour performances, Townes visits other Girl Scout councils around the country including Girl Scouts of Southeast Florida and Girl Scouts of Middle Tennessee.

On July 18, Townes released a new version of her song “Somebody’s Daughter” featuring Girl Scouts of Middle Tennessee Troop 6000. The troop consists of girls who reside at a homeless shelter. The girls earned their musician badge after working with Townes on the song.

"It’s been such a cool adventure and I’m loving getting to know Girl Scouts as a community,” Townes told the audience at GSNEO. “It’s such an amazing thing you guys are part of. To me, it’s really cool to watch you have this sisterhood and people that you can turn to that are going through the same things you are. We’re never alone in those things and I love to see that through Girl Scouts.”