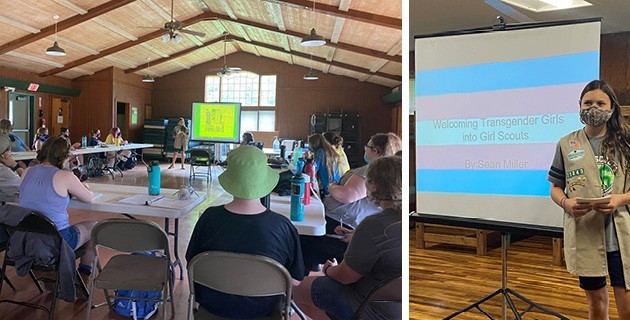 Juliette Gordon Low had a vision when she founded Girl Scouts: for the organization to be a “big tent”, a safe and inclusive space for all girls. Thirteen-year-old Sean Miller, a Girl Scout Cadette from the Cleveland area, is ensuring that Juliette’s vision is fulfilled by using her voice and personal experiences to educate troop leaders, parents, Girl Scouts, Girl Scouts of North East Ohio (GSNEO) staff and board members, and groups beyond her community about welcoming transgender girls to Girl Scouts.

As part of her troop’s Bronze Award, Sean created presentations and trainings to ensure proper information was available about transgender girls.

The Girl Scout Bronze Award is earned when troops do a sustainable project that has a positive impact and changes the community for the better. Inspired by the aMUSE Journey for Cadettes, Sean’s troop decided to focus their project on breaking female stereotypes. As the troop discussed female stereotypes they had faced, Sean realized that the harmful, incorrect information distributed about being transgender had negatively affected her life. Girl Scouts became a safe space for her, and she wanted to share her positive experience with others.

To get started, Sean interviewed 15 troop leaders, parents, and Girl Scouts to get their perspective on what they wanted to learn from her training. Next came her script and PowerPoint presentation. Sean reached out to local organizations for guidance on what information to include in her trainings, including GLSN, Colors+, LGBT Center of Greater Cleveland, and Gender Spectrum. She worked for a year and a half on the project and has been able to present her trainings via Zoom and in person to 10 different groups, impacting hundreds of people. Recently, Sean presented her training in person at three different camps in one day and was able to bring her whole family with her.

“I want people to know how to welcome a girl who is transgender to Girl Scouts,” Sean said. “That they not only understand her and accept her, but that they also know exactly how to help her achieve her needs.”

“Somebody has to be out there fighting,” she said. “I can and want to use my skills and my message to make a difference. I do these presentations and testify because I have to.”

In appreciation for her hard work and dedication, Sean has been awarded a Senatorial Citation by Senator Nickie Antonio (Democrat, Ohio); recognized by Senator Sarah McBride (Democrat, Delaware); and has been nominated and awarded by Colors+, an organization dedicated to strengthening LGBTQ+ youth and allies by promoting individual and community wellness, as a Rising Leader – Youth Advocate at the 12th Annual LGBTQ+ Heritage Day.

“It’s so exciting that people recognize my advocacy and they appreciate my message and what I’m trying to achieve,” said Sean. “I feel very thankful, happy, and very proud of who I am and that I got to do this project.”

Sean embodies what it means to be a Girl Scout. She’s confident, courageous, and steadfast in using her voice to advocate for what she believes in to make the world a better place. Behind her is a strong support system, including her family, Girl Scout troop, and friends.

“My amazing parents and brother have always accepted me and have shown me that I’m valued and loved.” Sean said of her biggest support system, her family. “I also really value the friendships I have [in Girl Scouts]. For me, the biggest adventure, which has been the best, is the connections I have made with so many people.”

When she’s not out using her voice to advocate, Sean uses her voice to sing as a member of Singing Angels, a non-profit dedicated to youth development through the highest level of artistic achievement in the performing arts. She’s also a big Taylor Swift fan, who is a Girl Scout Alum.

Sean lives by the words: “Work for progress, not perfect.” This reminder helps her slow down and take breaks, taking the time to rest so she can continue to fight for what she believes in.

“GSNEO is lucky to have girls like Sean who exemplify outstanding courage, confidence, and character,” said Jane Christyson, Chief Executive Officer of GSNEO. “Sean’s dedication and positive outlook makes her an inspiration to us all and we can’t wait to see what more she can accomplish.”

Girl Scouts is dedicated to serving ALL members. Girl Scouts and their families of all backgrounds deserve to feel seen – it’s at the heart of creating a safe, inclusive space where every Girl Scout can thrive. 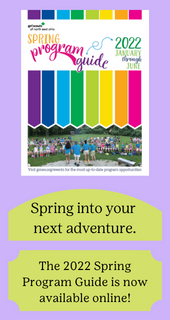